Has del.icio.us tapped out its userbase of early adopters? Will social bookmarking fail to go mainstream?

I think mainstream users will want to use del.icio.us,...Some users call for a redesign…something flashier and bolder. I don’t think that’s the answer. Easier bookmarking and better tools for sharing seem like the right direction to me....

Better tools for sharing? How about a whole new layer of tag-o-spheric interactivity like the ability to pass tags between blogs, Freshtags style! Michael's right. The solution here isn't a flashier site, it is a continued migration of the features and functions off the site and into our links bars & sidebars. Most of the recent innovations (tagroll, linkroll, Firefox extension) have done that....

There have been a number of recent discussions about what it would take to de-geek Del.icio.us, and to see the recent bookmark list be as much about dog grooming as it is about programming. Let's also note, though, that Del.icio.us was the only game in town (or at least the stand-out choice) for social bookmarking as recently as 18 months ago when I started to tag my posts for categories. Now 3Spots lists more than 100 social bookmarking sites, with every imaginable topical and geographic focus. The middle and late-comers to social bookmarking have their pick of services, & will choose features that are important to them.

More generally... What is the next evolution in social bookmarking? My thought is that for this to catch on, online content has to become more important to more people, & that Aunty Sue has to choose to bookmark that cookie recipe at home & then visit the site again at grandma's, rather than writing it down or printing it & stuffing it in her purse... What do you think?
______

Related Update: Pete Cashmore at Mashable reports that Del.icio.us now has a sidebar widget like the "favorite me on Technorati" widget, that invites readers to add you to their network, and that they've also added the ability to see a list of "most active users" for individual tags, thereby allowing the casual user to see who is interested (& presumably authoritative) in a given area.

The sidebar widget is known as a Network Badge. It is customiseable in the same way as the tagroll, via a very clean interface that has a preview at the right. In addition to the default "add me to your network" link (which is the point,after all) the badge has custom options to show username, network count, fan count, & the option to choose no icon, or either a large or small icon. If your network or fan counts are 0, that element will not display. See what a network badge looks like in the preview column below: 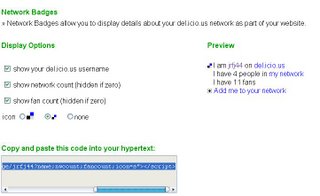 Once again, Del.icio.us are getting people off the site, & getting the features & functions into your everyday browsing experience.... This tool also follows up the division of the inbox into inbox & network by amplifying the "social" components of the site.

Filed in: del.icio.us webtech social_bookmarking
Posted at 8:57 AM by John.

Sharon Pickering said...
Speaking of del.ici.ous! I have searched and searched, but cannot find my answer. Maybe someone here can shed some light.

Sharon Pickering said...
Another quick question. I read a post here regarding Technorati tags, but can't find that post again. I thought it said that if you have tagged your posts using del.ici.ous, you don't have to tag with Technorati. Technorati will automatically pick up the tags.

Greg said...
I think one big kicker for social bookmarking would be if Microsoft buggers the bookmarks in IE7.

Since they are (more or less) forcing most users to download it, any miss-step in how they implement transfer of bookmarks, synchronicity, sharing between users etc, could see a lot of less-tech-savvy users saying "this is crap - I just want to have the same bookmarks at home and at work". If social bookmarking sites can meet this need adroitly, they could pull a huge proportion of users over to keeping them online.

For Microsoft, the stakes are very high: even an ugly or clumsy new menu layout could push millions of users into the waiting arms of del.icio.us etc. I'm sure many services will be watching closely for that opportunity.

I'll have a go at your questions - I hope others can jump in to help clarify!

2) If you want search engines and other software to "spider" (crawl over) your content and discover it, then you're best is to put in rel="tag" type links.

Whether or not these point to technorati or del.icio.us doesn't matter (AFAIK); the point is that each post has a few links that look like this:

Tor said...
BTW, has anybody else noticed that del.icio.us will now import bookmark files that have been exported from your browser? It took them about a day to convert mine, and they put in some suggested tags for them. They're still private while I go through and give them the tags I want, but now they're all there. I don't know how long this feature's been active, since I usually use the pop-up to tag things, rather than go to the main page.
8/04/2006 04:06:00 PM
<    >

Sharon Pickering said...
Greg, thanks. John also sent me an email about the tagging issue.

Or, there may be a trick in the del.icio.us API to get more than 100 posts back. Failing that, you might be able to use the API to fetch them in 100-post chunks using the "date" limiter.

But, more profoundly, who would want an uncategorised list of 527 posts? You'd end up having to use ctrl-f to find stuff anyway. Surely navigating via tag combos (on the delicious site itself) is more natural and useful? Or is there some other archival or transfer purpose to getting a big list on one page?
8/05/2006 01:27:00 AM
<    >

Sharon Pickering said...
Greg, I see partly what you are saying. (The other part is Greek to me.) But I'm not using this particular instance to go to the del.icio.us site. I have a link in my sidebar which leads to a "Table of Contents"
for my blog.

I want is to be able to display all of my post titles on that page, even when the number of posts exceeds 100.

My reasoning for this...it gives readers one place to go on my blog to see all of the post titles. I'm not completely happy with the idea of browsing through the archives to find posts of interest, and I felt this method was the answer. At a glance you can see if any of the titles are what you are searching for.
8/05/2006 09:58:00 AM
Post a Comment
<< Home
Freshblog Feeds


Blogs marked ~New updated within the past 6 hours.

This work is licensed under a Creative Commons Attribution-NonCommercial-ShareAlike 2.5 License. The Template is generated via PsycHo and is Licensed.